Well I imagine it’s shiny…it’s shiny in my mind. I have been nominated for a Liebster award by the lovely Chloe Mc Mahon. You can check out her blog, complete with illustrations that get funnier the longer you look at them, right here.

Also, now that I’m back and out in the open I should probably thank Chloe from getting me out of the procrasti-closet…I have several blog drafts that I just didn’t have time to write and in the last three months.*

*OK, new job yes, but also being lazy, watching terrible TV, sleeping and anything except working on my blog. Bad Jenny. So I will endeavor to write the posts shoved in the drafts shelf over the next month. Anyway, back to the award.

So, my understanding for this award is that the rules vary but the last few blogs in the chain say I have to answer a list of personal questions or one big question. Since I can’t think of anything that would warrant “one big question”. I will  borrow, the questions Chloe used. (Thanks Chloe!)

1. What advice would you give your 13-year-old self?

Eh….where to start. You are a mess, but only sporadically so most of the stupid things you do you will come out unscathed and mostly I believe in making your own decisions to learn the right way in life…a couple of things though. Your friends in first year are not the be all and end all. In fact, you’re all kind of stupid and kind of mean so give them a wide berth nice and early, it’ll just save some time. Don’t have fights and fall out with friends over Bebo. It’s embarrassing enough that you are old enough to have had Bebo without the knowledge that you ended a friendship through Bebo Mail (during which you STILL managed to change the mail skins). Oh and don’t worry, that’s not the end of the world either. You’ll make up and go drinking together now.

2. Why did you start your blog?

I want to be a writer. It’s that simple. An author, then a journalist, then a feature writer, still an author. Most people who knew my passion encouraged me to start a blog. I had it all through college and while there are always things I have to write, some of which I really enjoy writing and some I haven’t enjoyed so much, there are always words in my head that I know don’t fit into a medium so they go on my blog. It’s where my creative and sometimes opinionated thoughts go. And when I’m having a bit of a mind block or my hands are a bit itchy to write, I always have my blog.

3. Where do you see yourself in five years?

Ok so in five years I’ll be 27…I see myself moved out. Possibly in the same job I’m in now (hopefully with more money, hint, hint). I hope to have a book written, whether that be published or not but I hope it’s written. Actually screw it, this is speculation and speculation should be optimistic. I hope to be writing books full-time, making loads of money, in a nice house with a car and I take two holidays a year and stay in the Merrion Hotel occasionally “just for a weekend break”. Oh and I have a dog; I definitely have a dog. And a pool, just ’cause.

I don’t like to keep fit. But as you can tell from my last blog post I will be running the Flora Women’s Mini Marathon in June. I’ve been out of practice for the last month because I’ve been very busy (that’s not code for procrastination – I really have been very busy). But I USUALLY run two or three times a week for an hour so that I can build myself up to running the full 10K in June. Aside from that, basketball, tennis, swimming…no, I joke. Just the running. And that’s all it will ever be. I’m currently lazy in disguise.

These aren’t the exact ones but they’re close.

5. What is your biggest regret?

Not buying those beige suede high boots on outnet.com! I know that sounds stupid and superficial but as you may already know, I try to not regret big things because that’s how I learn lessons. But these boots were amazing. They were in this ridiculous sale, where apparently everything goes like lightning because it’s all designer stuff at shocking discounts. They had the boots in my size and they were like €200 down from like €500 and they were in my size and I stared at them for the award-winning half hour of indecisiveness until eventually I tried to “Proceed to Checkout”…and they were gone. Just like that. That was six months ago. I still haven’t let go.

Now, here are my nominees for the Liebster award. I’m not putting any rules so it’s up to you! (Also because I’ve been a bad blogger, these three are my blog recommendations for February, March and April. They may have been recommended before but they’re just that good.)

It’s Strawberry Blonde – Also back from a hiatus from being busy, I think she Sarah deserves an award. And she’s a journo grad like myself. 🙂

Pretty Purple Polka Dots – A recent actually shiny award-winner, Aoife gets this award because she’s a woman after my own heart with her writing. She has a rule though, because she did a previous challenge about answering questions, she has to pick questions (or one big question) that she hasn’t yet answered on her blog.

Jenny Don’t be Hasty – She’s a journalist too. And her name’s Jenny too! Good strong name. She writes about a lot of different things, including beauty and fashion and her theme and logo will bring out insane envy. But in the best possible way. 🙂 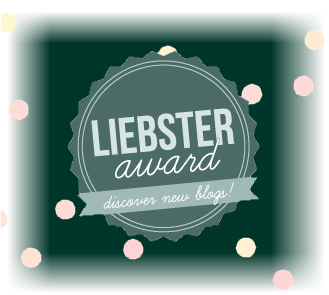